So I just had a serious damsel in depression moment.  I got my Beyonce nails done, I got my Beyonce spray tan, I stepped into my Beyonce booty shorts and put on my Beyonce wig…but when I showed up in Hollywood at 7am I was the only Beyonce around.   What the hell!  I payed good money on active.com to run this race.  Where are all the Beyonce impersonators?
I looked at my smart phone.  I was at the right place. 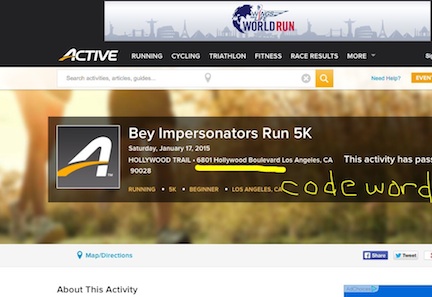 I called my husband, who looked on his his iPad.  He confirmed.  I was at the right place.  The active.com posting was kind of weird, though.  It says “scenic, flat & super fast.  Entirely in the park and along the shore of Lake.”
There is no park, and definitely no lake at the corner of Hollywood and Vine.  Maybe they mean the Hollywood Reservoir up above Hollywood and Vine.  So I drove up there.  But again…I was the only Beyonce around.  So I went back down to 6801 Hollywood Blvd. to wait and see.  Registration wasn’t until 8, and, you know…Beyonce kind of equals diva…so maybe everyone was running just a little bit late.

But no Bey Impersonators every showed up.  So I drove back up to the Hollywood Reservoir and ran my 5k underneath the Hollywood sign.  Then, a little deflated, a little depressed, and a little tired, I drove home.
Now although I’ve learned that my husband is not, and can never be my knight in shining armor….because I am not and will never be a helpless damsel…we acted out that fantasy for a minute when I got home.   He had gone out and bought me some flowers to cheer me up and said “Happy first 5k” when I walked through the door.  I let him console me and help me feel better.
I’m determined to track those Beyonce impersonators down, though.  I’m convinced it’s a secret club and you have to prove yourself worthy before joining.  6801 Hollywood Blvd. must be code for something else.

I’ve already decided on my next 5k race.  The Chardonnay Run in Santa Monica.  At least then if no one shows up there will be wine.
BTW.  Just noticed I’m the only one “Who’s in?” on facebook.  What the eff?

One thought on “Beyonce Fail”