It’s been a shitty week, in the middle of of shitty month, that’s come along in this incredibly shitty year.  Sometimes you just think you’re so done with being a human toilet, that you let out a giant refusal from the bottom of your being.

And in response to your refusal, the universe releases another huge, stinky mess on your soul.

My husband lost his job a year ago.  He lost it a year after losing his other job.  He lost it right after we started to feel good.  Right after we finished setting up all our retirement accounts, and our daughter’s college funds.

Just when I let out a sigh of relief over finances for the first time in my life, the rug got pulled out from under us.

Savings went down (’til there was none), bills went up, and things in our home that needed attention went unattended to.

Then I broke my leg, and was out of work for six weeks…on a reduced income.

Then with the relief that I had healed well, I went back to work…only to find that I wasn’t quite ready to go back to work.

My foot was in worse shape than I had expected, swollen and still painful.  After being at home in bed or on the couch for six weeks, my system wasn’t ready to return to a stressful ten hour day (eight plus the one hour commute each way.)

I knew I wasn’t doing well. I mentioned it to my boss.  I tried to get a hold of my doctor (never an easy task with my HMO).  Two weeks after returning to work, I got a letter from my doctor stating I needed a reduced schedule for a few weeks.  Five hours a day.

It was a Friday, and I was ending my last full day.  I knew I could handle skipping the morning and afternoon commute and work 10 to 3.  I was glad to be done with my last full day for a while.

I was exhausted, and anxious to get home, and in my hurry I backed into another car on my way out of the parking lot.  I almost let out a little laugh, because I thought the universe was done with it’s diarrhea for a while.  But then this little drip dropped on top of me.

I got out of my car, found the owner, apologized, exchanged information.  The usual stuff you do in that kind of situation.  Except that apparently someone didn’t think it was usual.

The next week I was sitting with the big boss and HR and being asked if I was ok.  I responded that I hadn’t been doing great, but that I was hopeful about the more limited schedule making a difference.  I was then told my behavior was “erratic.”  I asked if they could explain the behavior so I could understand and address it.

“Well someone saw you pulling out of the parking lot in a hurry.  It was just…erratic.”

That’s all I got, which wasn’t much to go on.

Other difficult things were going on that week at work, and my judgement was called into question.  Not by my boss, who I adore and respect.  And who knows me and would tell me if my judgement was off.  But by others who don’t know me, but know my “label” because I’ve been out with it at work.

It’s been a devastating week.  Because my work place, which used to feel safe and purposeful, doesn’t feel the same way that it used to anymore.

My mom and I had plans today to go to the Santa Anita Race track for a fancy event.  I wanted to go to distract myself, but didn’t feel like being fancy.  I had a fancy dress…a fancy hat.  But I didn’t put them on.

I wanted to walk with a cane and look haggered and old.  Because I was.

I cried in the car on the way to the race track.

I don’t want to work anymore.

I want to go on disability for my illness.  I want to stay home and wear muumuus and make jewelry.  I want to swim with the slow, old group at the gym in the mornings.

I want something different than what I have right now.

My mom listened, and cried with me.  Nurtured and loved me.  I may want something different right now, but I got what I needed.

And when I got to the race track, I did what I always do when I’m having a bad day.  I seek out other people’s stories.

I talked to the jockey walking the room.  She wasn’t racing because she had broken her collar bone riding.  She had to have surgery.  She was on “event” duty, just waiting to be able to ride again.

I talked to the elevator operator who had worked there for thirty one years.  She said she’d seen it all in that time.  “Tons of celebrities”, she said as she winked, “…but I’ll never tell.”

She told me to try to see if I could get into The Director’s Room.  It was one of the last things left over from the original track.  And it was worth seeing.

It took me a while, but I finally found The Director’s room, and wandered around a bit.  Then I stumbled into a smaller room where two men were sitting.

“Sure…come take a break with us.”

And I sat with them and heard their stories.

Both of their dads worked there after World War II.  They told me they hung around there a lot when they were kids, and that they both have worked there their whole adult lives…and were both about to retire.

“Come here…let me show you this,”  one of them said.  He pulled down a wood panel from the wall and showed me the old elevator shaft of the private elevator of the original owner.

“You could only fit one person in it.  This was his office.  It came from downstairs straight up to here.”

“You should see the Eddie Logan Suite,” the other man said.  There’s about a $25,000 minimum bet to get in.  Celebrities hang out there all the time.  Dr. Strub, the orignial owner, hired Eddie Logan as the shoe shine guy.  He had a huge, fancy shoeshine station, and Dr. Strub would get his shoes shined every day before he rode the elevator up to his office.”

“Yeah…Eddie out lived three wives.  He worked here through his eighties and died in his nineties.”

“Everybody wants to get into the Eddie Logan room.  But nobody knows who Eddie Logan is.  They should really put a picture or something up about him on the wall.”

Then they reminded me that the race track had been an internment camp for Japanese Americans.  The people who were gathered up and held there slept in the horse stalls.

After our break was up, I thanked them and walked back to the fancy event in The Chandelier Room.  I looked at my program.  Horse number six was named “Acceptance.”

I won on Acceptance.

I ran into one of my break room friends one more time, and he pointed out the balcony of the Eddie Logan room.  I walked over to get a closer look.  I took my phone and snapped a picture.

I’m not in the exclusive Eddie Logan Suite making $25,000 bets.  And I’m not in an internment camp.

And I accept that.  Acceptance is always a good bet.

It was an amazing day.  Sometimes the universe does have a movement on your mind.  But only because you need to be well fertilized in order to grow. 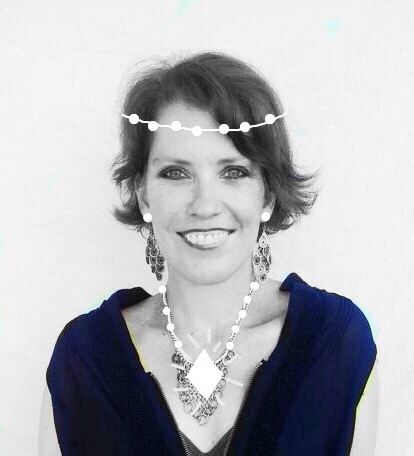 I’m a resilient, damn it all to hell Dame! 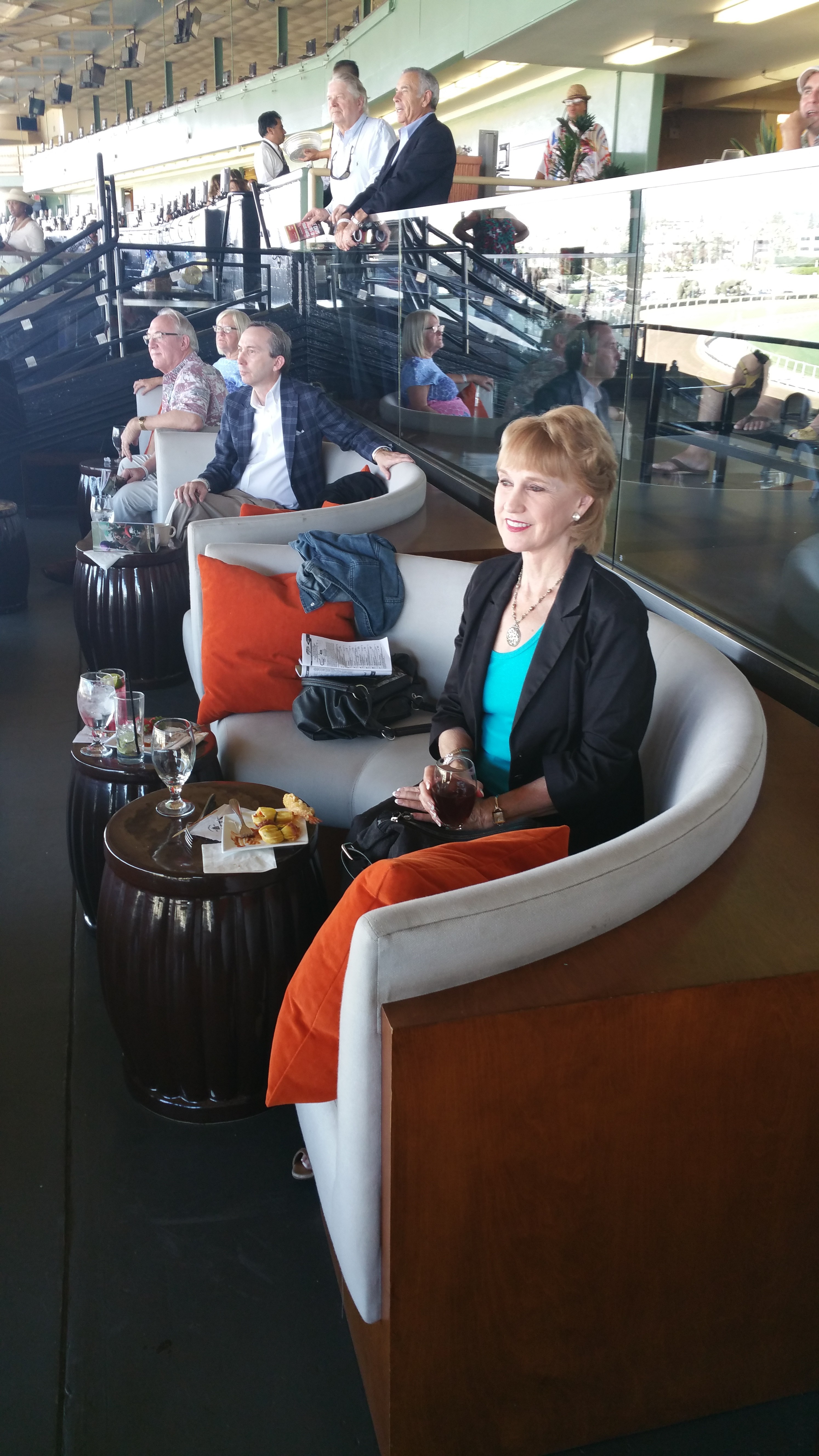 My mom watching the races. 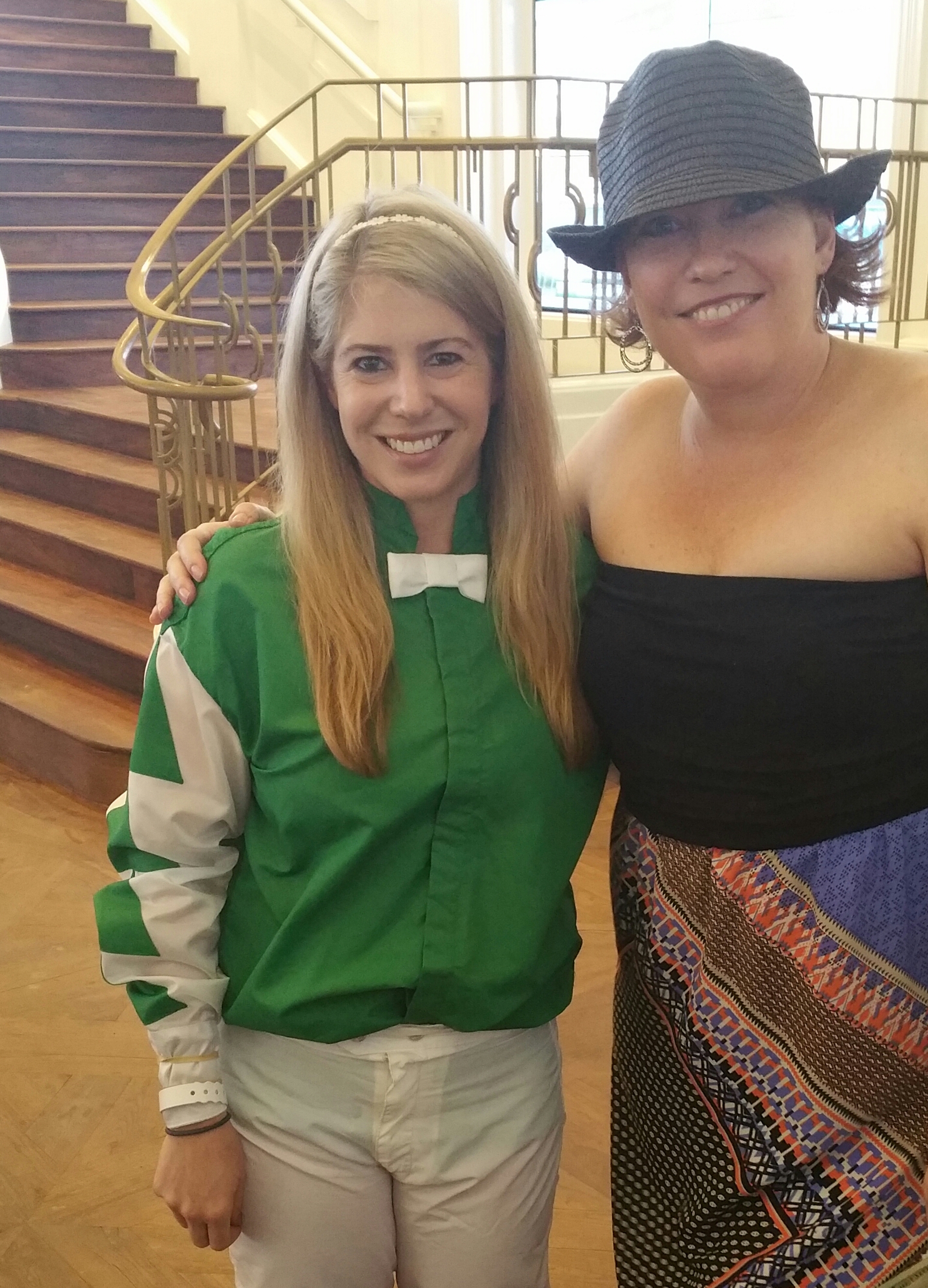 Me with my broken bone buddie.

(Imagine grey hair and an ugly mermaid on my shoulder.) 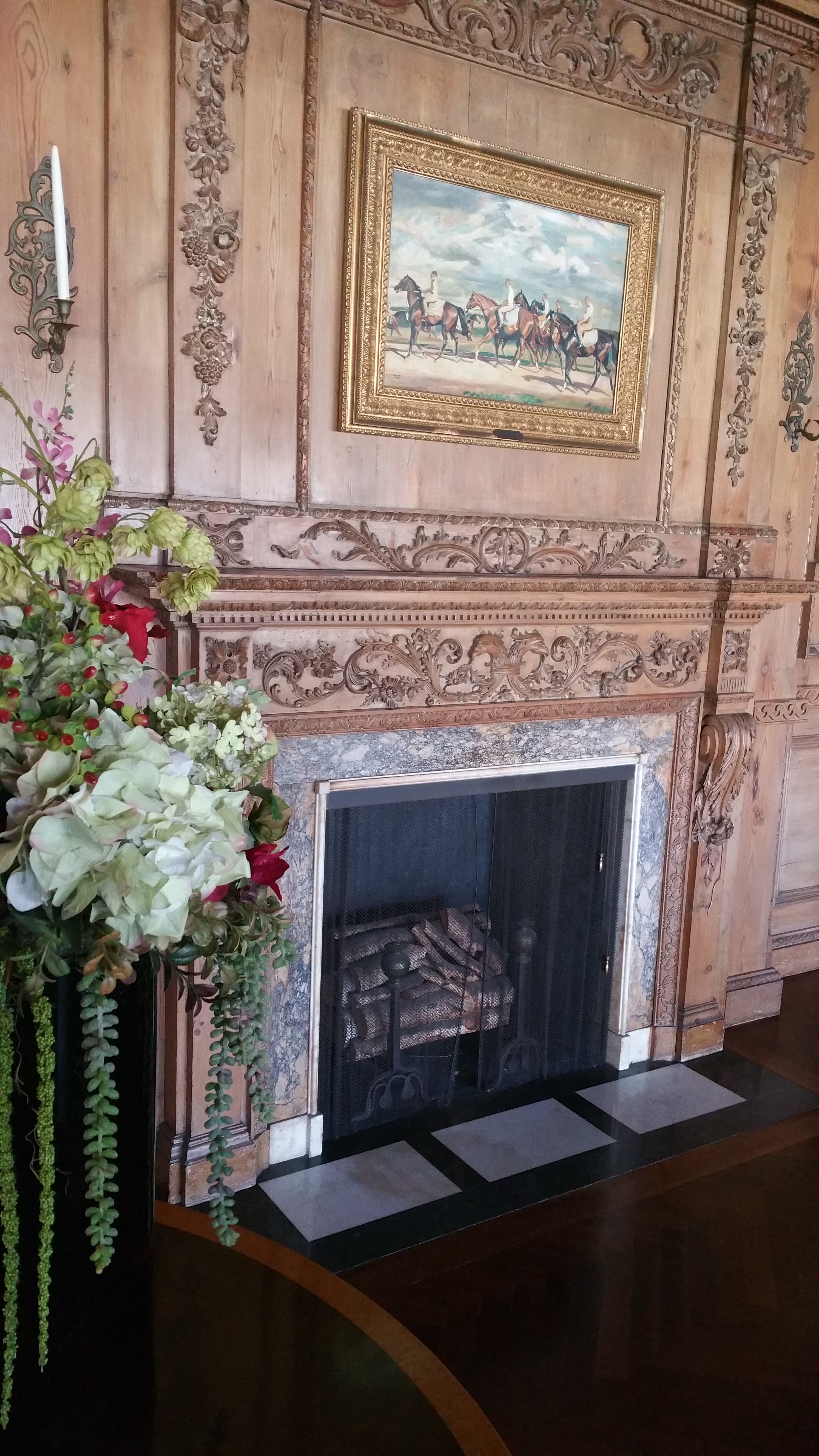 The original fireplace in The Director’s room.  It was empty while I wandered around,

with left over flowers from an event the night before. 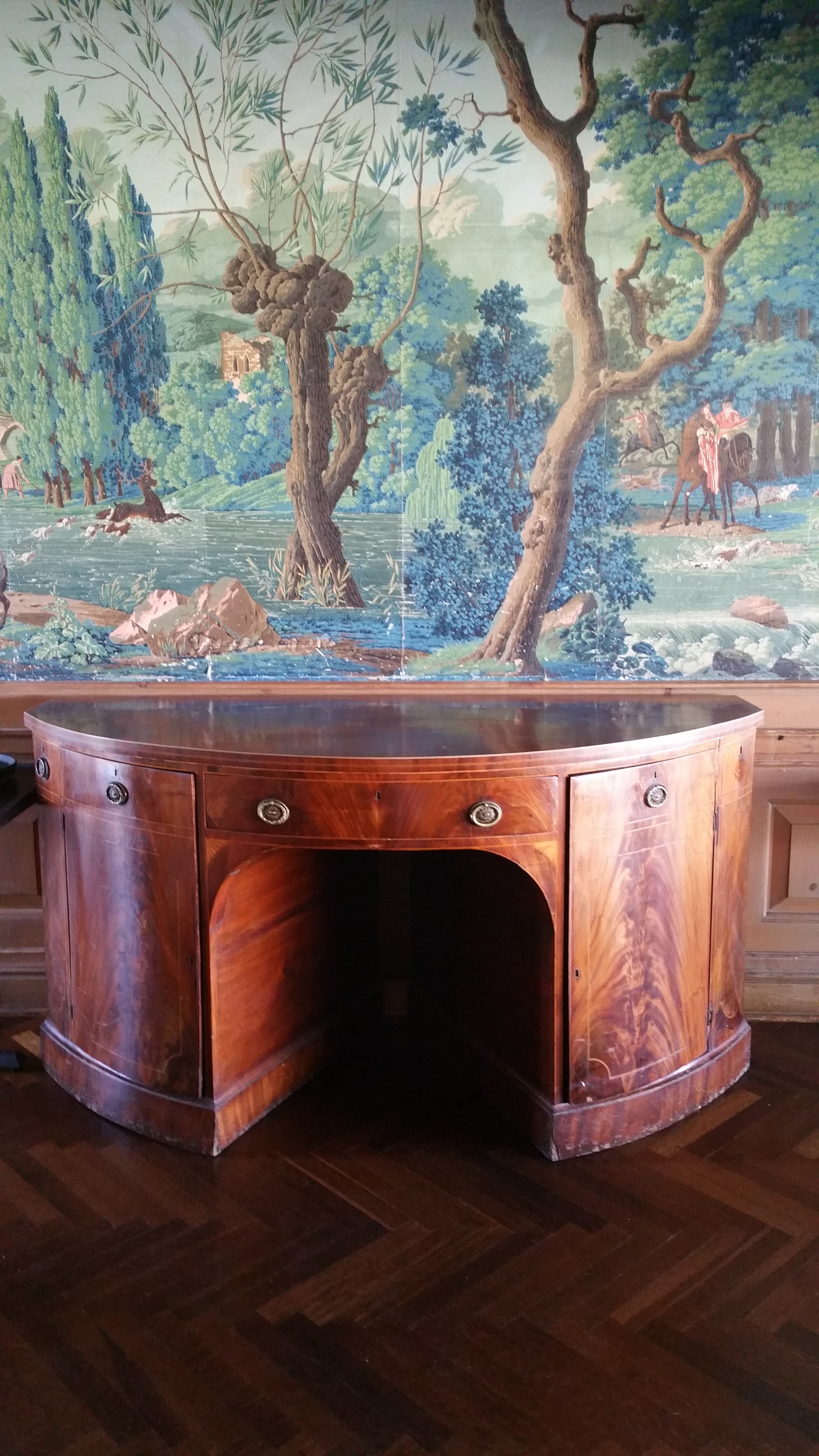 My break room friend told me this was original wallpaper from the 40’s.

You can see how old it is when you look up close. 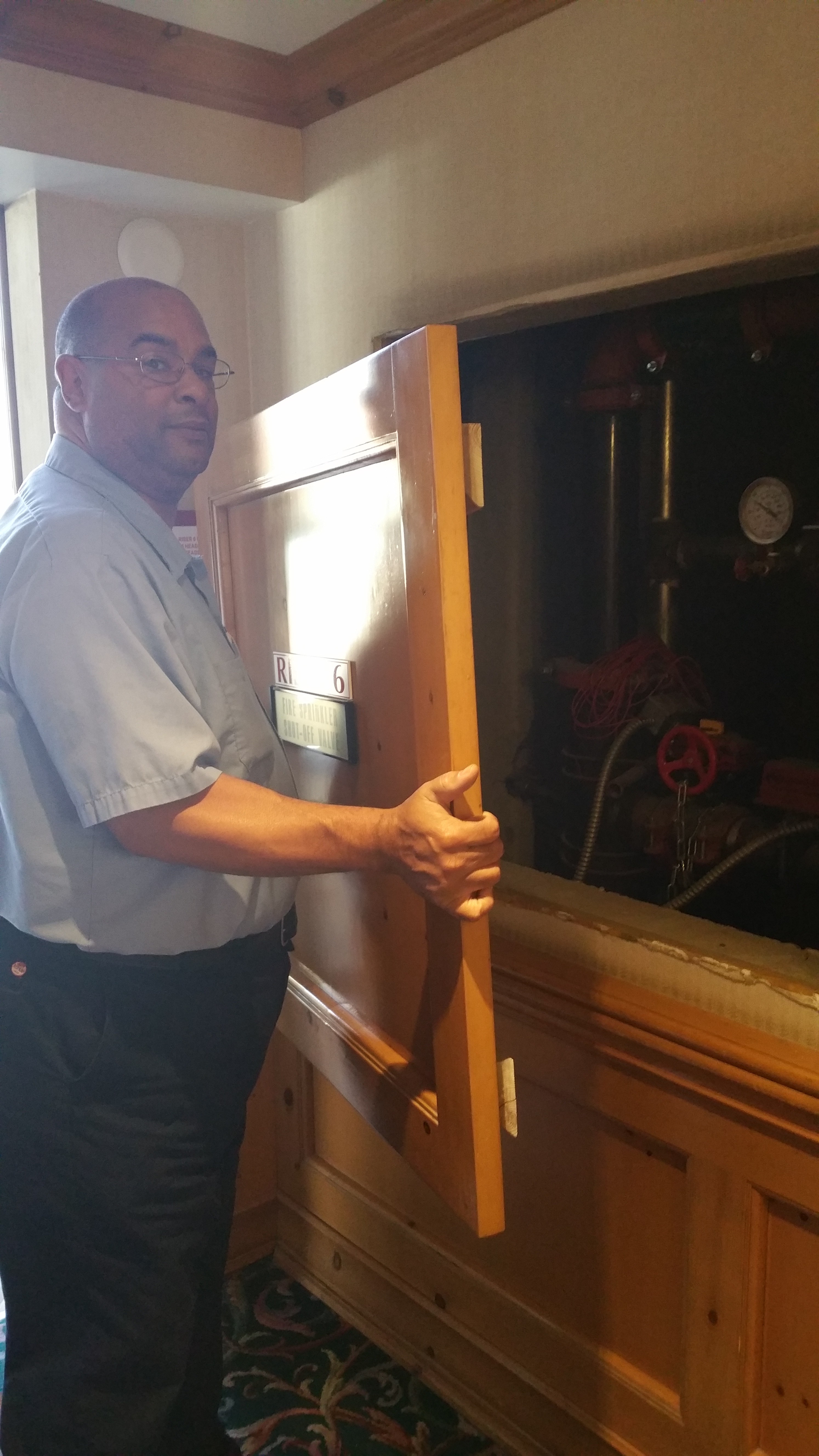 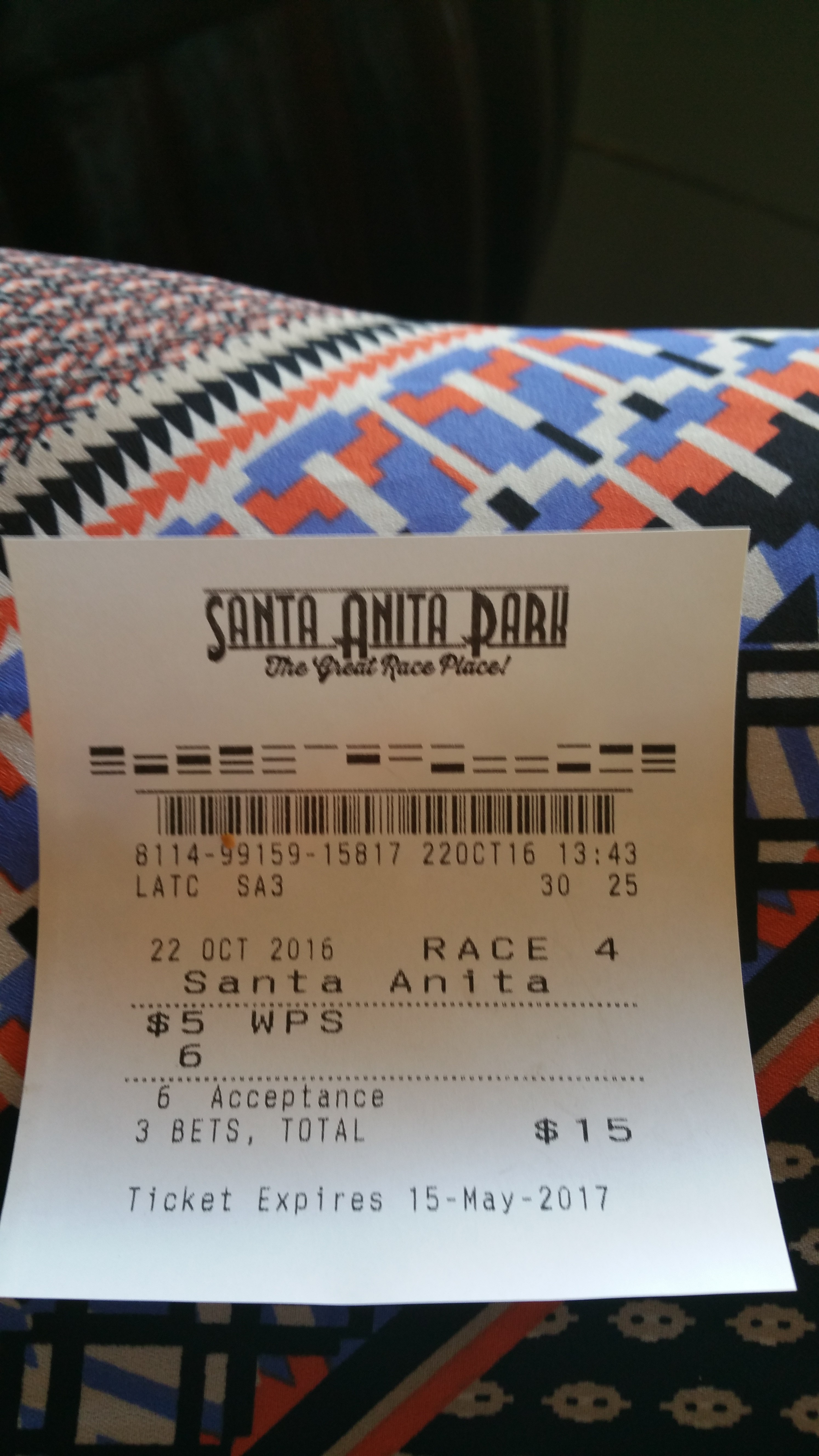 My bet on “Acceptance.” 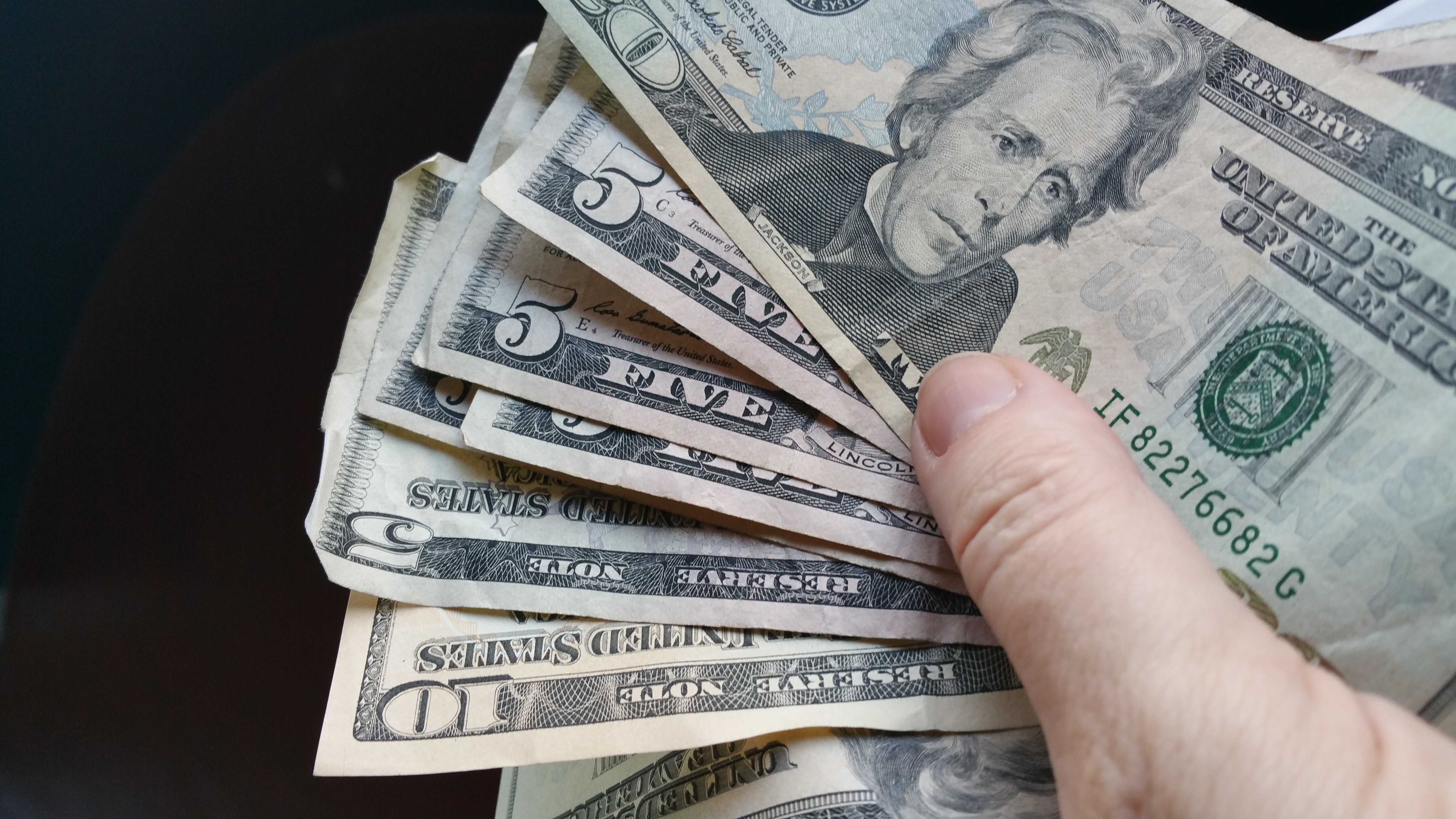